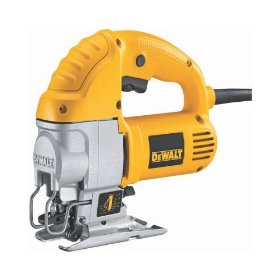 &Co have through & through been hardcore manufacturers of various power tools & construction machineries. The inventor of the radial arm saw, Raymond E DeWalt established DeWalt products & co in 1924 & since then the company has grown in leaps & bounds, establishing their factories all over the world with the head office in Pennsylvania. DeWalt Products & co produces jigsaws that that are sturdy, reliable, powerful, consistent & most importantly-all this without burning a hole in your pocket.

DeWalt Products & Co has launched many jigsaws which can be broadly classified under 2 series namely the DC & the DW series. The DC series are the cordless jigsaws where as the DW series is the corded one. The most positive character of all DeWalt Product & Co jigsaws is the weight balance that the user experiences. It has been designed to exert just the right amount of pressure on the cut without taxing to much.

The blade changing mechanism of DeWalt

Jigsaws are the most secure & accident free compared to the rest of the jigsaws brands. A 'U' shaped lever which releases the blade immediately when it is just lifted. So the blade change can be done in just one hand.

Most of these jigsaws are a good bet for the price paid though a few lower models snap up if they are continuously subjected to vigorous work. . There is nothing special to mention about the power of DeWalt Products' higher end model jigsaws. It is moderate enough to cut through materials of nominal thickness & density. The DeWalt DW series kit comes with an assortment of blades that are meant for wood as well as certain light metals, though this option adds value to the purchase, the blades are flimsy & do not remain in a working condition even after very few uses.

But somehow these jigsaws do not seem to extend the smoothness that the other leading jigsaws brands in the market offers. The blades cut with quite some effort lacking a certain ease which is evidently noticed while the cut comparatively tough materials.

Another major drawback is that the shoe that ejects the blade from the socket is made of plastic & hence is prone to easy breakage. The mechanism of the speed adjustment is a very roundabout process as it utilizes both the hands. This means the operator has to discontinue his work mid way to set the speed. Also, there would be no speed control or a possibility of speed variation while the cut is under progress.

Unlike its rivals DeWalt products

& Co do not manufacture even a single model with the basic L.E.D light, work light, dust bag or even a dust blower. Though this is a minor factor, professional carpenters & other users reconsider the DeWalt jigsaws keeping in mind the lack of accuracy that may prevail in the long hours of dimly lit conditions. Thus, DeWalt is evidently a compromise on quality but can surely save some money.