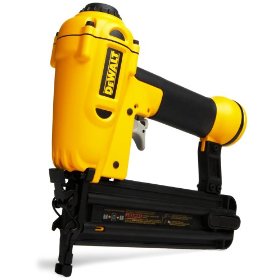 & Co, needs no introduction. Being the age old power tool manufacturers, today DeWalt Products & Co have spread their wings all over the globe being trusted producers of all power machinery including nail guns. DeWalt Nail Guns come with both the corded and cordless models.

All of DeWalt Products & Co. Nail guns are launched under a single D series which is further sub divided followed by the model numbers or alphabetical notations.

The DeWalt Nail Guns over flow with positive features like being light weight and having easy to use mechanisms to load nails and to change the depth adjustments. The flexible exhaust airflow which can be adjusted in any direction obviously a very purposeful modification.

The nail count indicator is a classic feature found only in a few models of DeWalt Products & co. nail guns. The indicator sets off a countdown as the number of nails in the coil drops down below a certain set count and glows yellow once it runs out of nails. This feature assuredly saves a lot of trouble, since repeatedly opening the magazine and checking the number of remaining nails can be a pain in the neck. The head of the nail guns behave like an angel if the nailer jams. They open up almost without any effort to do so.

Scientific design and proportional weight balance in the hands make the DeWalt Products & Co nail guns a hot prop in the market.

All said we all know every coin has 2 faces. DeWalt Products

& Co. nail guns can be big time losers sometimes when it comes to some of the recent models. One queer phenomenon noticed across all DeWalt Products & Co. nail guns are that a lot of their products seem to be faulty right from the beginning. For instance, the nail gun may start leaking air from the posterior side just as you are switching on the tool. Misfiring and double firing also seem to be common problems occurring in the first few uses itself. Toe nailing can be clumsy even if the pressure is adjusted to the maximum extent. Power can waver very distinctly and frequently.

Another frequent complaint is that the head of the nail does not completely get into the surface always, especially if it's something like hard dried oak or similar. Oiling frequently does help, only to a very limited extent. Even worse the service centers seem to be charging users for the repair they just DO NOT seem to be doing.

The driving piston gets stuck before every alternate nail is pinned. Changing the O-rings can be a temporary solution with meagrely satisfactory results. There is no sufficient retraction of the driver in some of the later models. Most of the times, users are deprived of safety options. There is no guarantee on the No Mar Nose nailers and the safety tip does not come as an attachment.
Conclusively, DeWalt Products